Photovoltaic Systems and The Sun 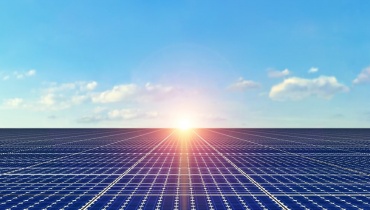 Photovoltaic Systems and the Sun

When we compare the amount of electricity generated by the solar photovoltaic (PV) systems of different Solar Schools, we will often see varied results. There are many reasons for this with one explanation being the intensity of light being absorbed by the PV cell is directly linked to the amount of electricity generated by the cell. In a solar generation system, this light is sunlight and its intensity changes throughout the day. These fluctuations vary based on the time of day, weather, latitude (or location) and the season. For example, during winter the generating daylight hours are shorter.

During the process of nuclear fusion, the sun produces energy in the form of electromagnetic waves or electromagnetic radiation (EMR). This radiation is referred to as the solar flux. As this EMR passes through the earth's atmosphere, some is reflected, absorbed and scattered, resulting in a reduction in the amount that reaches the surface. The level of solar radiation varies around the globe. 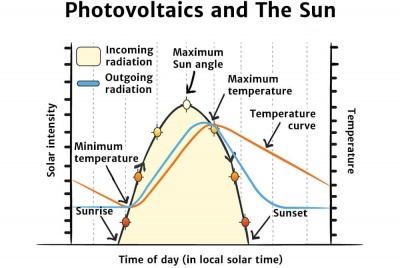 Diurnal cycles refer to patterns within about a 24-hour period that typically reoccur each day. Most daily cycles are caused by the rotation of earth, which spins once around its axis about every 24 hours.

During a cloudless day, the solar flux increases from sunrise to midday then continues to decline until sunset. This change is related to how high in the sky the sun appears.

Early after sunrise and again near sunset 'rays' from the sun are spread over a larger area of the earth and pass through more of the atmosphere. The result is that early morning and late afternoon sun is not as bright or intense. The sun is most intense around midday as the suns 'rays' have to pass through less amount of atmosphere, so there is less reflection and the sky is brighter. (i.e., the sunlight is most direct).

Seasonal Changes in the Solar Cycle

The seasons are governed by the tilt of the Earth's axis in space as it journeys around the Sun in a year. The tilt of the Earth also influences the effects of incoming solar energy on atmospheric and surface temperatures. And the tilt of the Earth influences the amount of sunlight that a location receives. At the equator, the amount of sunlight in a day is the same each day during the year. At locations, further away from the equator, seasonal changes occur and a day's length will increase during the summer season and decrease during the winter season. When the South Pole of the Earth is tilted towards the Sun, this is our Summer. Six months later, when the South Pole is tilted away from the Sun, it's our Winter. In between these we have Autumn and Spring.

The seasons don't begin on one day and finish on another. That's because our orbit around the Sun is continuous. It takes quite some time for the Earth to heat up or cool down, and that's why the seasons change gradually.

When Australia is tilted towards the sun, the sun appears higher in the midday sky, and the day length is longer. The opposite is true for winter. 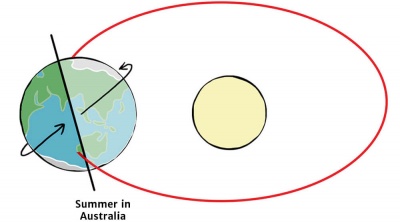 The tilt of the Earth's axis makes the days longer in summer.

The amount of sunlight available for conversion changes with the seasons.

Latitudinal Influences on the Solar Cycle

Latitude is a measure of the distance you are located from the equator. It is commonly shown as an imaginary horizontal line that goes across the earth on maps and is used along with longitude as a reference point to determine location.

Latitude is an important factor in determining what type of climate a location will have. It affects both daylight hours and the sun's altitude on any given date and at any given time. Locations at lower latitudes (near the equator) receive stronger and more direct sunlight than locations near the poles.

The equator receives the most direct sunlight because sunlight arrives at a perpendicular (90 degree) angle to the Earth. Sunlight rays are concentrated on smaller surface areas, causing warmer temperatures and climates. As incoming rays move further away from the equator, solar intensity decreases.

This is due to decreasing incoming sunlight angles that result in the Sun's rays being spread out over a greater surface area of the Earth. Latitudes near the poles always receive the Sun's rays at lower angles, therefore creating a colder climate. In the middle latitudes, the angle of the Sun's incoming rays varies from lower in the winter to higher in the summer, causing seasonal temperature changes.

Proximity to the polar latitudes in summer gives longer daylight times than latitudes closer to the equator. At the extreme (inside the Arctic or Antarctic circles) there will be 24 hours of daylight per day for part of the summer. However, the sun appears lower in the sky closer to the poles than in equatorial latitudes. Also, the light must pass through a great distance of atmosphere before reaching the surface, decreasing its intensity even more.

The distance solar rays travel through the atmosphere is less at higher altitudes. Therefore, there is less atmospheric absorption, and consequently, more solar radiation as the elevation increases.

The immediate surroundings of a classroom or building can have a big impact on the level of solar radiation reaching solar energy systems. Vegetation, such as overhanging trees; tall buildings and even landscape structures like hills can block incoming radiation and cast shadows. These shadows can have a huge impact in reducing the usable solar radiation and therefore the productivity of solar panels.

Other Factors to Consider 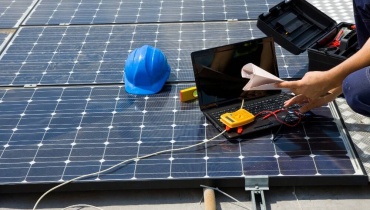 When we compare the amount of electricity generated by the solar photovoltaic (PV) systems of different Solar Schools, we will often see varied results. There are many reasons for this with one explanation being the intensity of light being absorbed by the PV cell is directly linked to the amount of electricity generated by the cell. In a solar generation system, this light is sunlight and its intensity changes throughout the day. These fluctuations vary based on the time of day, weather, latitude (or location) and the season. For example, during winter the generating daylight hours are shorter.

The size of the Photovoltaic Array

The capacity of the school's photovoltaic array will affect total daily electricity output, though not the output per cell.

Orientation and inclination of the Photovoltaic Array

In most cases the photovoltaic cells panels are roof mounted. The roof inclination and orientation will differ between schools resulting in a variation of effectiveness.

Weather conditions, notably sunshine hours and cloud cover, will affect the quality of light. By looking at the weather conditions on each schools' solar generation graph you can visualise the differences in the time frame selected. These factors are also measured at a range of official weather stations.

High temperature can reduce the solar panel's production of power. Higher temperature increases the conductivity of the semiconductor material, charges become balanced within the material, reducing the magnitude of the electric field, inhibiting the charge separation, which lowers the voltage across the cell. Depending on the location, heat can reduce the output by 10% to 25%.

Solar cells cannot absorb light as effectively when the surface of the solar panels are covered with dirt or bird droppings, which doesn't get washed by the rain.