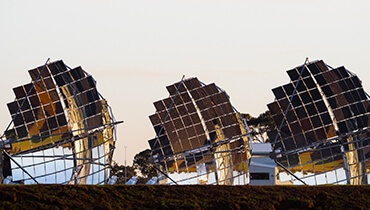 Solar dishes are used to generate thermal energy from the Sun.

Concentrated solar thermal (CST) technology harnesses the Sun's power to generate electricity. It uses lenses and reflectors to concentrate sunlight, heating a fluid such as water or oil and producing steam to drive a turbine.

The flat-plate collector design is a relatively simple one consisting of:

The sides and bottom of the collector are usually insulated to minimise heat loss.

Solar thermal technology is not the same as solar panel or photovoltaic technologies.

Solar Thermal electric energy generation concentrates the light from the Sun to heat water or other fluids, and can also power solar cooling systems (like air-conditioning)

At the present stage of technology development, the major applications for utilising solar thermal energy are heating water, heating buildings and heating swimming pools. In general, the collectors used are flat-plate, solar-energy collectors, in a fixed position.

Concentrating collectors are generally used where greater energy conversion efficiencies are needed, for example, when the heat generation needs to be very high, as in the production of steam.

Solar thermal power plants use the Sun's rays to heat a fluid to produce high pressure, high temperature steam. The steam, in turn, is converted into mechanical energy in a turbine and into electricity from a conventional generator coupled to the turbine.

Solar thermal power generation uses the same conventional technologies of power generation except for the fuel source providing the heat energy for steam production. Solar thermal technologies, for electricity generation, use concentrator systems due to the high temperatures needed. Currently there are three types of solar-thermal power systems in use or under development: the solar dish, solar power tower and parabolic trough. 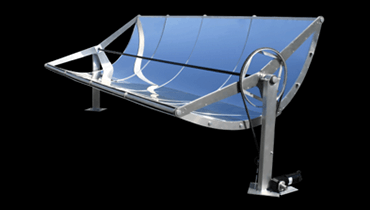 The parabolic trough is one type of solar-thermal power system. 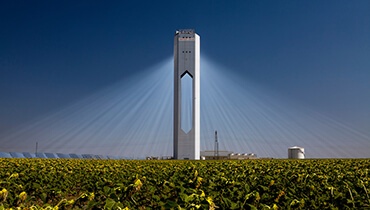